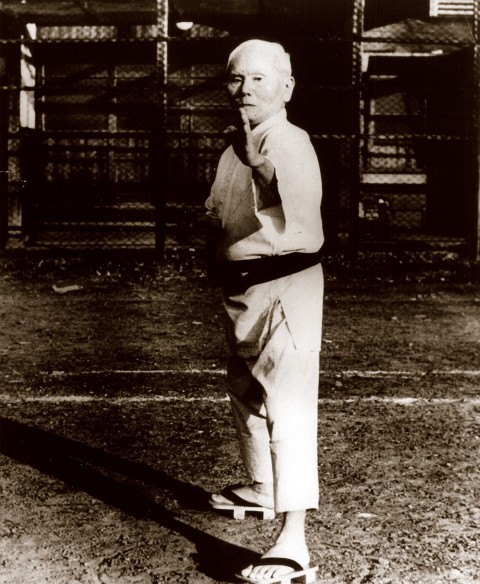 In the contemporary period, from around 1900 to the present time, Master Funakoshi Gichin was the most important influence in the development of Karate as we know it today. He was born in Shuri, on the Island of Okinawa, on November 10, 1868. At the age of 11 years, he began to study Karate and was a devout student of the two greatest masters of all time: Yasutsune (Anko) Itosu and Yasutsune (Anko) Azato. Master Funakoshi had the opportunity to practice with Master Kiyuna, who with his bare hands could strip the bark from a living tree in a matter of moments, and Master Toonno of Naha, one of the island’s best-known Confucian scholars. In addition, he trained at various times with Master Niigaki, and Master Matsumura as he became a scholar of Chinese classics. In spite of the formidable partisanship among the different styles inherited from the years of secret training, Master Funakoshi rose to such a level that he was initiated to all of the major methods of Karate practice in Okinawa.

I was rather a sickly baby and a frail child; accordingly, it was suggested when I was still quite young that to overcome these handicaps I ought to begin the study of Karate.” — Gichin Funakoshi

At the age of 21, Master Funakoshi became a teacher at a primary school and continued to practice Karate secretly at night even though it was banned. For Master Funakoshi, the word Karate took on a deeper and broader meaning through the synthesis of these many methods, becoming Karate-do, literally “the Way of Karate, or of the empty hand.” Training in Karate-do became an education for life itself.

On March 6, 1921, the Crown Prince, who was later to become the Emperor of Japan, observed a Karate demonstration held in the Great Hall of Shuri castle in Okinawa. In the spring of 1922, Master Funakoshi traveled to Tokyo by the invitation of the Ministry of Education in Japan to introduce Karate to the Japanese capital. By now, Master Funakoshi realized that he wanted to see Karate-do introduced to all the people of Japan. He wrote to Master Azato and Master Itosu about his idea and they replied with encouragement, but warned him about the difficulties facing him.

In the spring of 1922, the Ministry of Education announced that a demonstration of ancient Japanese martial arts was to be held at the Women’s Higher Normal School in Tokyo. Master Funakoshi presented three long scrolls of arranged photographs of various stances, kata, and movements of the hands and feet. The entire demonstration turned out to be a great success. He intended to return to Okinawa at the end of the demonstration, but he remained because of the advice and insistence he received from Jigoro Kano, the father of Judo, and Hakudo Nakayama, a great authority on Kendo. “I had planned to return to my native island immediately after the demonstration, but postponed my return when the late Jigoro Kano, President of the Kodakan Judo Hall asked me to give a brief lecture on the art of Karate. Sometime later, I was again preparing to return to Okinawa when one morning I was called upon by the painter Hoan Kosugi. So once again I put off my departure and began giving lessons to members of a painters’ group called the Tabata Poplar Club, of which Kosugi was president.”

In 1923, the Meisei Juku dormitory for students from Okinawa became the temporary Karate school under Master Funakoshi. During that period, Karate was virtually unknown. He had very few students and lived in poverty. To make ends meet he performed many odd jobs. “To pay for the tiny room where I slept, I took on all sorts of odd jobs at the dormitory: watchman, caretaker, gardener, and even room sweeper.”

He proceeded to introduce Karate to the major universities of Japan, including Keio, which was the first University Karate Club in Japan, with Iao Obata as its captain, and Waseda University, with Hiroshi Noguchi as its captain.

In 1936, the first official Shotokan Dojo opened in Mejiro, Tokyo, only to be destroyed by an air raid in 1945. Under Master Funakoshi, the original shihans (chief instructors) were Takeshi Shimoda, Master’s first outstanding student, who died at an early age in 1934, and Yoshitaka (Gigo) Funakoshi, the Master’s son. Yoshitaka Funakoshi died young in 1945, preventing him from carrying on his father’s teachings.

At the close of World War II, the U.S. military command in Japan, under General Douglas MacArthur, considered Judo and Kendo to be overly militant and their practice was strictly forbidden. However, Professor Ohama approached the U.S. Occupational Force headquarters and requested that Karate be taught at the University level and at some clubs. When headquarters asked Professor Ohama what Karate was, he explained that it was like the gentleman’s sport of boxing, with some kicking added to it. Because of Professor Ohama’s request, Karate in Japan escaped the prohibition, and during the next ten years, it flourished in several of the universities. 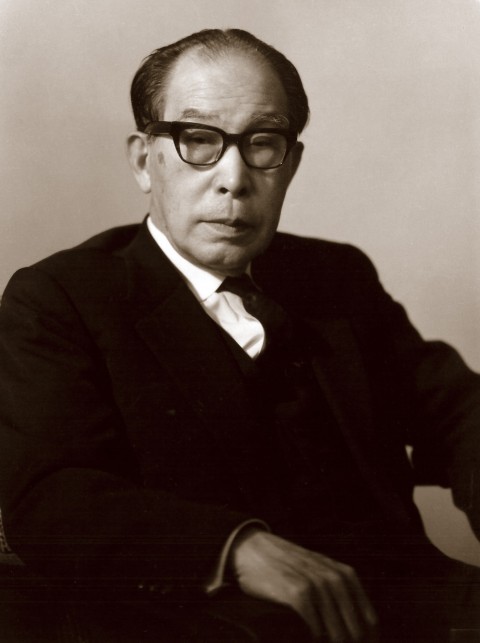 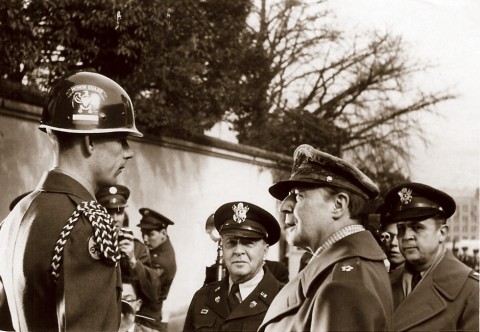 After WWII, General Douglas MacArthur, head of the U.S. Occupational forces in Japan, strictly forbade the practice of Judo and Kendo but overlooked Karate.

On the eve of the Korean war, when Japanese-American relations allowed for a liberalization of the rules imposed by the U.S. military, Karate-do became one of the most popular martial arts and was even taught to the American troops by some students of Master Funakoshi.