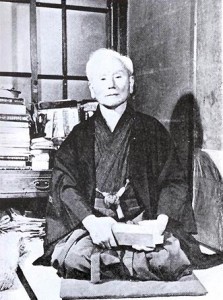 Gichin Funakoshi is widely considered the primary “father” of modern karate due to his efforts to introduce the Okinawan art to mainland Japan, from where it spread to the rest of the world. Born in 1868, he began to study karate at the age of 11, and was a student of the two greatest masters of the time, Azato and Itosu. He grew so proficient that he was initiated into all the major styles of karate in Okinawa at the time. For Master Funakoshi, the word karate eventually took on a deeper and broader meaning through the synthesis of these many methods, becoming karate-do, literally the “way of karate,” or of the empty hand. Training in karate-do became an education for life itself.

Master Funakoshi was the first expert to introduce karate-do to mainland Japan. In 1916 he gave a demonstration to the Butokuden in Kyoto, Japan, which at that time was the official center of all martial arts. On March 6, 1921, the Crown Prince, who was later to become the Emperor of Japan, visited Okinawa and Master Funakoshi was asked to demonstrate karate. In the early spring of 1922 Master Funakoshi traveled to Tokyo to present his art at the First National Athletic Exhibition in Tokyo organized by the Ministry of Education. He was strongly urged by several eminent groups and individuals to remain in Japan, and indeed he never did return to Okinawa.

Master Funakoshi taught only one method, a total discipline, which represented a synthesis of Okinawan karate styles. This method became known as Shotokan, literally the clan or the house of Shoto, which was the Master’s pen name for his poetry, denoting the sound of the wind blowing through pines.