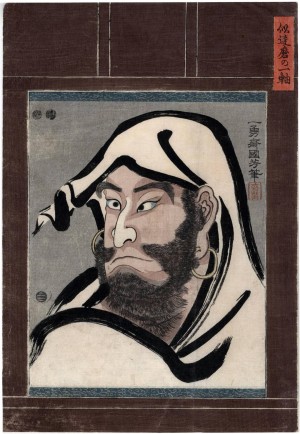 The origin of Karate is derived from a mixture of legend and factual history. About fourteen hundred years ago, Daruma (Bodhidharma), the founder of Zen Buddhism in western India, introduced Buddhism into China. To reinforce his oral teachings, he brought with him the Indian philosophical writings called Sutras. His spiritual and physical teaching methods were so difficult and demanding that many of his disciples could not stand the hardships and dropped in exhaustion. In order to give them greater strength and endurance he developed a more progressive training system, which he recorded in a Sutra, “Ekkin-Kyo” (ekkin means to reinforce the body: Kyo means a written book).

Daruma’s Ekkin-Kyo can be considered as being the first book of Karate of all time. The physical training heavily impregnated by his philosophical principles was taught in the monastery of the Shaolin Temple in the year 500 A.D. (Shaolin may also be spelled “Shorin” with the same meaning). Under the influence of the Shaolin monks, the methods of unarmed fighting in China grew into an elaborate discipline called Kempo or Kungfu, which is a general term designating all Chinese boxing. However, during the course of time, numerous independent schools developed, These schools drew their influence either from the Shaolin School of Northern China, characterized by very colorful, rapid, and dynamic movements, or from the Shokei School of Southern China, known for more powerful and sober techniques.

These teachings eventually spread to the Ryukyu Islands, including Okinawa, the main island of the chain. This archipelago, which formed a natural path for the expansion of Chinese culture to Japan, stretches nearly without interruption from the southernmost Japanese island, Kyushu, to the Chinese island of Taiwan (formerly Formosa) in East China. Okinawa’s unique geographical position, as well as the two periods in history when weapons use was forbidden are the major reasons for the high degree of development of Karate in this location.

“I was rather a sickly baby and a frail child; accordingly, it was suggested when I was still quite young that to overcome these handicaps I ought to begin the study of Karate.” –Master Funakoshi

From the dawn of history in Okinawa, there existed a natural method of fighting called Okinawa-te (or Okinawa Hand). The first expansion period of Karate in Okinawa occurred approximately 500 years ago when King Hashi of the Sho Dynasty reunited the three principal kingdoms of the Ryukyu Islands and unified the entire archipelago. In order to maintain authority without a large military force, King Hashi decreed that the caring of weapons would be a crime against the kingdom. Without weapons, secret training in barehanded fighting methods increased greatly in popularity among the peasants and grew much more sophisticated and efficient.

Around 1600 A.D., the Japanese Lord of Satsuma attacked and conquered King Hachi’s unarmed kingdom. Just as King Hashi had done before him, the Japanese invader prohibited the native’s right to possess and carry weapons

to protect his domination. Their reaction produced the second period of development for Karate in Okinawa. Secret night training in Okinawa-te again expanded, becoming even more deadly. Techniques were also developed using farm implements such as sticks, sickles, chains, and iron bars, which were impossible to forbid to the peasants. Thus, the techniques of Bojutsu, Tonfa, Nunchaku, and Sai were born.

During this period the family of the Shimazu, Lords of Satsuma in Southern Japan, endeavored to promote commercial and cultural exchanges with the outside and to open the southern part of the country to China. This policy combined with the geographic closeness of the Ryukyu Islands to China greatly accelerated the influence of Chinese fighting methods on Okinawa.

About 1735, the Chinese influence on Karate was first mentioned in a local history book, “Ohshima-Hikki” (The word Ohshima means “big island” and Hikki means “note”). The book tells of a man named Sakugawa who traveled to Chin, mastered Karate and returned to Okinawa to teach his methods.

The Chinese, who were gifted politicians, were aware of the great popularity of Karate among the natives of Okinawa. In effort to expand commercial relations with Okinawa, the Chinese dispatched embassy officials who were also masters in Chinese boxing. The strategy succeeded when these Kempo masters were warmly received by the Okinawans as they taught their art to the people.

In 1664, the cultural attaché, Koshokun, arrived in Okinawa with many of his Chinese students and began teaching on the island. He invented a kata (a prearranged form simulating combat situations) which he left as a legacy to the inhabitants of the island. Long called Kushanku, from its inventor’s name.

The kata, Kushanku, is now taught in Shotokan schools under the name Kwanku. It was the favorite kata of Gichin Funakoshi (船越 義珍), founder of Shotokan Karate-do, who was born November 10, 1868 and died April 26, 1957.  Master Funakoshi renamed the kata Kwanku, which means “to see through nothingness” or “to look at the sky”.

Soon other Chinese delegates came to Okinawa. The principal ones were Waishingzan, Iwah, and Ason. The latter restricted the number of his students to a handful, of which the most famous was Master Tomigusuka who was at the peak of his fame during the youth of Master Funakoshi. During the same period, an unknown Master from Southern China also arrived, settled in Okinawa, and became a great influence. In spite of the absence of a written language in the island at the time, his fame is such that the stories of his adventures remain with us today. This period in the history of Karate extends from 1800 to 1870.

So, Karate in Okinawa developed from the synthesis of two fighting techniques. The first one used by the inhabitants of Okinawa, was very simple but terribly effective and above all, very close to reality since it was used throughout many centuries in real combat. The second one, much more elaborate and impregnate with philosophical teachings, was a product of the ancient cultures of China. These two origins explain the double character of Karate: extremely violent and efficient but at the same time a strict and austere discipline and philosophy with a nonviolent emphasis.