Tsutomu Ohshima was born in the Chinese province of Tsingtao, on August 6, 1930, and by the age of three, he had already entered the world of Japanese martial arts. His father, Fusakichi, had a training area at their home where many Japanese martial artists visited. Practicing daily with his father’s strict encouragement, he pursued Sumo wrestling from the age of 3 years old for the next 10 years. Also, Tsutomu Ohshima trained in Kendo (Japanese sword fighting) at the same time from the age of 8 to 15 years old, including Kendo Special Training. In addition, many Japanese Judo competitors visited their household and Mr. Ohshima soon became involved with Judo for 4 years. He holds certificates for attending 20 Kendo and Judo Special Trainings as a young boy. 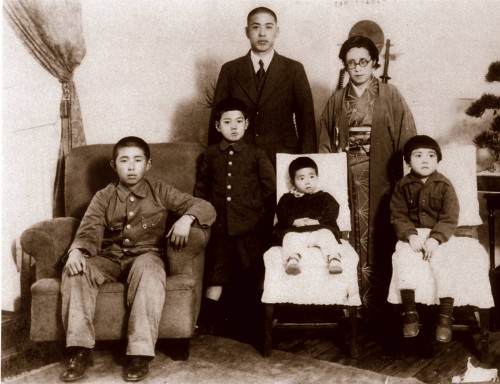 Mr. Ohshima’s family moved back to their native country of Japan just before the outbreak of World War II. A few years after WW II ended, Mr. Ohshima decided to enter Waseda University, one of the most highly rated universities in the world. He was told by a friend of his father about the mysterious art of Karate taught at Waseda and became fascinated. In Japan, 5,000,000 people were training in Kendo, but it was very rare to know anyone training in Karate. Because of the war, Kendo and Judo became prohibited and everyone left the martial arts. He traveled to Tokyo in 1947, where he pursued a degree in economics and joined the prestigious Waseda Karate Club in 1948. Mr. Ohshima’s distinguished association with Shotokan Karate began at Waseda University where he trained directly under Master Funakoshi from 1948 to 1953. It was difficult times after the war and there was no food during the occupation period. So, one of his Seniors got him a job at the American officers’ club to clean up for 12 hours, six days a week. There was no refrigeration, so once a week he had to unload a truck of ice blocks on his back. He was paid 5 dollars a week for 72 hours of work. After 2 months working during the summer his full income of $40 was saved, and Mr. Ohshima had enough to pay for his first Special Training. “You have to create a value for your Special Training.” His first Special Training was on Sado Island as a White Belt in 1948. The Captains at that time were Senior Hiroshi Kamata and the Vice Captain was Senior Matsuo Shibuya. “At my first Special Training, I thought everyone was crazy and I thought that I was the only normal guy. I was shocked.” 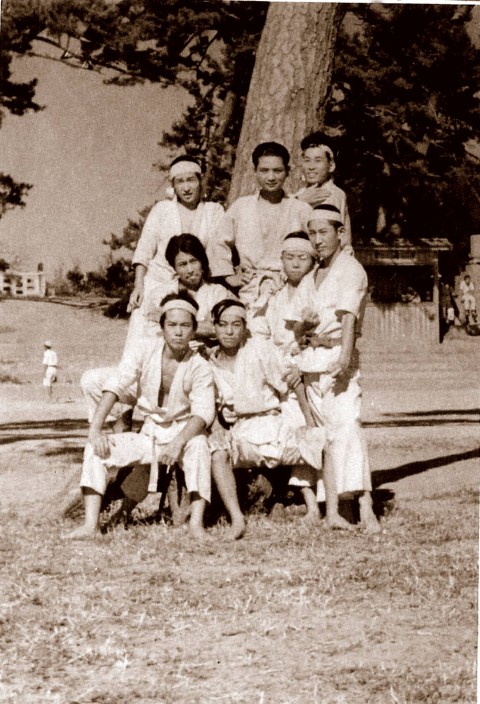 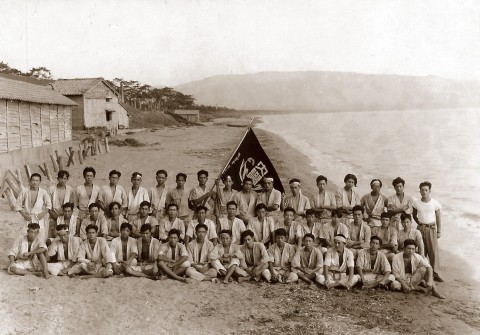 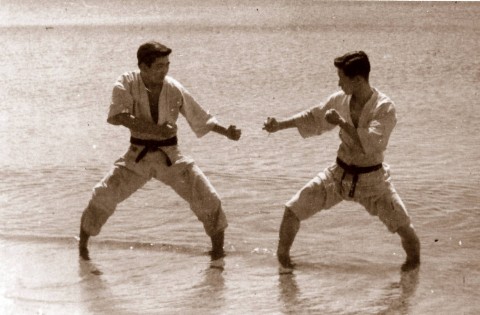 The practices at Waseda were hard and went on for hours. During practice, we never talked or never took a break. He would wake up at 4:00 am to go to work, then at 2:00 would attend the University full time as a student, and then, go to the dojo every evening without missing any practices. When he came home late at night, he would study until midnight. In one year of practice and 4 Special Trainings, Mr. Ohshima was awarded the rank of 6th Kyu. A couple of years later, Vice-Captain Mr. Kawabe recommended Tsutomu Ohshima for the Black Belt promotion for his hard training, spirit, and strong mentality. 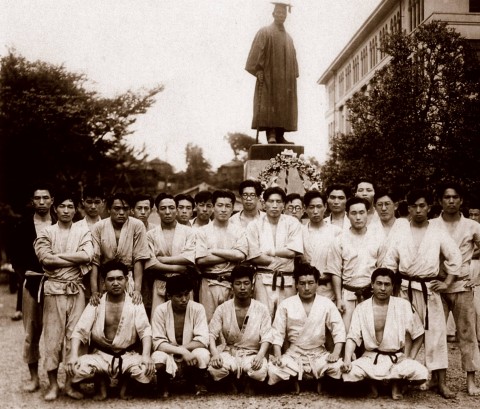 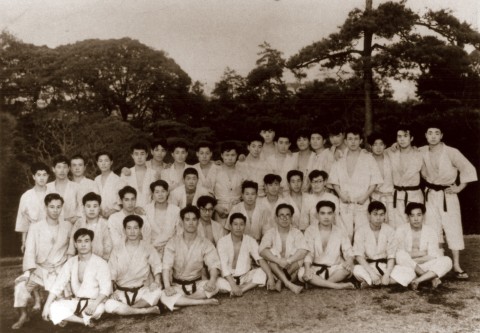 He was fortunate to have been strongly influenced by many high-level seniors such as Hiroshi Noguchi (1st Waseda Captain), Shigeru Egami, Toshio Kamata-Watanabe, Todao Okuyama, and Matsuo Shibuya. Mr. Ohshima has taken it upon himself to invite each one of these seniors as a guest of the SKA and enrich the experiences of its members. Mr. Kawabe, 40 years later, became the first donor for the Shotoland where the Ohshima Dojo sits today. In 1952, Tsutomu Ohshima was appointed as the Captain of the Waseda University Karate Club. At the all-Japan Sandan promotion in the same year, Master Funakoshi personally awarded Mr. Ohshima his Sandan rank while honoring him with the highest score of any participant. Mr. Ohshima’s early reputation for being strict, tough and unyielding followed the Japanese martial arts tradition. The other university clubs labeled him as the “Waseda Tank.” It was also, during 1952, that Mr. Ohshima created the 4 corner judging system still used in modern day tournaments around the world. 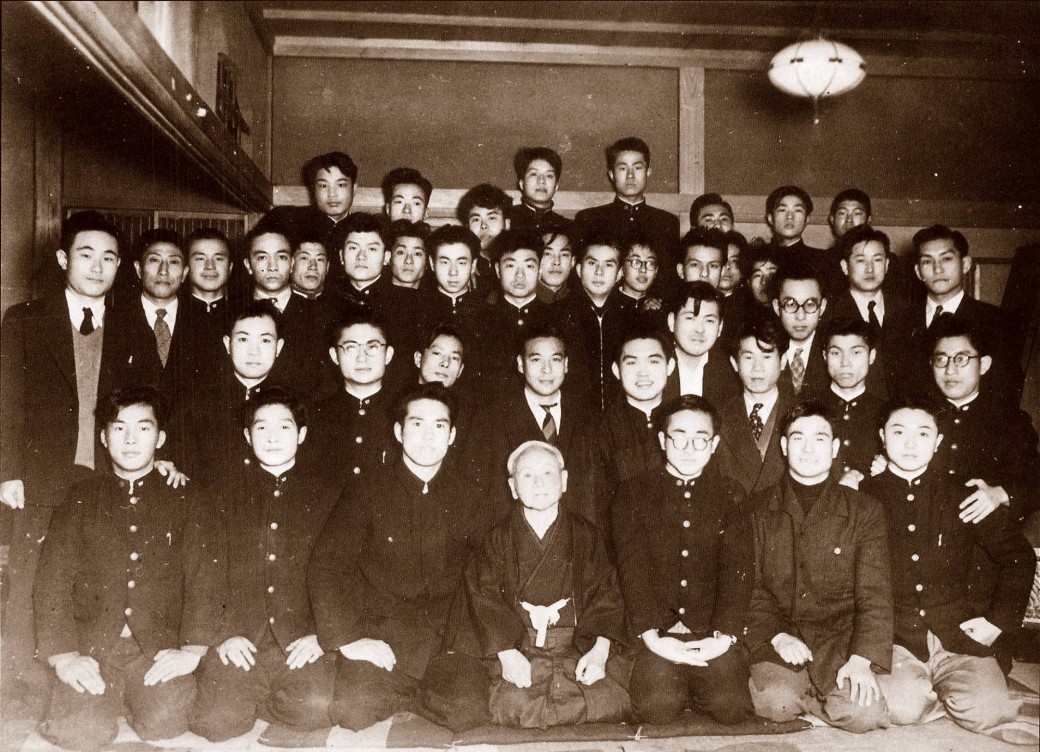